Hitting obstacles and not sure how to get through them? 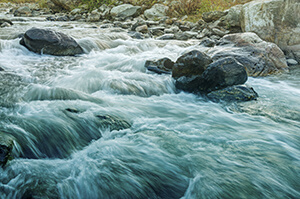 In a recent conversation, a friend was sharing her frustration at something she felt she couldn’t do. She was trying to adopt a practice she had been told to use around organization. As hard as she tried to adopt the practice, it didn’t seem to work for her. She had heard repeatedly the success others had had, but for her, she felt she had failed. She felt frustrated that she couldn’t make the practice her own and as a result avoided any practice around it at all.

As we spoke and I saw the sense of disappointment weighing heavily on her. I asked her if she could instead of feeling blocked, could flow like a river. She stopped, a bit stunned by what I had asked. What did a river have to do with her barrier to adopting the practice she had been taught?

I explained, that when a water flows in a river, it has a general direction it wants to move. Frequently as the river flows, there are obstacles in its way: rocks, tree branches and more. Does the water stop and just stand still because it faces an obstruction? No, it finds another path, by flowing around or over the barrier.

Again, I asked if she could flow like a river.

She sat for a moment and said there had been a techniques she had used in the past that had worked, but she no longer believe it was “the right way” to get things done. She was told that this other method was the way to go. I offered that if she didn’t find the “new” method working, and instead was doing nothing it seemed she stopped flowing when she hit the obstacle. Instead, flowing like the river, she could find another way by using the method she had previously engaged.

I saw her shoulders relax as she realized she could give herself permission to divert her path to one that worked for her. She smiled and agreed, yes, she would like to flow like the river and didn’t recognize there was another acceptable path than what she had been told.

When you find that you are hitting an obstacle, stop and ask yourself, if you were to flow like a river how could you get around it? You may be surprised that when you give yourself permission to divert, even slightly from your path, the block is removed.

What obstacles have you faced that you altered your direction and were able to move forward?